Both Swiftian and Dickensian, Larry Hankin’s “How To Be Homeless” @ The Fanatic Salon

When one wants to learn the art of living, they go see art. 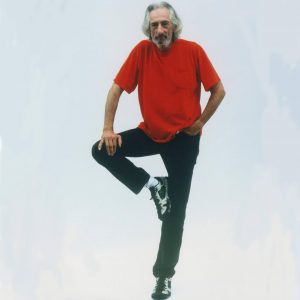 Water Lilies (Nympheas) by Claude Monet, once described as “The Sistine Chapel of Impressionism”, as a random example, taught me that if I did a little studying before taking that young lass to the art museum, I might stand a decent chance of getting some good ole American action.  It never worked.  I never left a good enough impression.  And in the same way, seeing comic actor Larry Hankin’s one-man show tonight, I did a little studying as well.  I was homeless.  Well, not smelly pushing a shopping cart full of plastic sharks down Venice Boulevard homeless; no.  I’m talking about couch-surfing at every type of other people’s domiciles from a crooked short hard business couch in the basement of a party crack house to a full bedroom in someone’s glorious home to occasionally sleeping in my car (or trying to), famously sleeping at spas in Koreatown, as well as a few sleepless nights at “the coffee hotel,” as I call it.  An all nite diner. Drinking coffee and trying not to pass out.   You see, even when I was at poverty level, I did have my standards.  Larry Hankin, on the other hand, has no standards and that’s exactly what we love about him.  He is above standards.

If you took the late Lord Buckley, infused him with a little Charles Bukowski, then just very lightly sprinkled him with the magic of the late Marty Feldman, you get actor, character actor, chameleon, comedian, and Corinthian Hankin.  From his utterly iconic role as the actor who the fictional network within the series of Seinfeld wanted to cast as “Kramer” rather than the real Kramer, who was actually Micheal Richards whose character was based on some real guy named Kenny Kramer.  (Head explode yet?)   The packed out sold-out house at The Fanatic Salon (the most user friendly comedy theater venue on the West Side; free wine darlings…at least for this show) were like little children unwrapping their anticipated gift, and not only finding their favorite toy, but batteries too. Rusted leaky batteries, but batteries nonetheless.  An amazing soul stationed within a tall thin tough but with intense and specific character looking sweet guy.   The convict you want to be on the good side of when you go to prison, because I know you, the reader, cheated on their taxes and I ratted you out to the Feds already.

“When you’re homeless, there are only two things you have to worry about.  How you’re gonna get through the day and where you’re gonna sleep tonight.” – Larry Hankin’s How To Be Homeless

How To Be Homeless is not a Debbie Downer by a long stretch.  What I witnessed tonight was like discovering the most talented troubadour street person who is university professor smart and yeah, maybe a little nuts.  Yes, nuts. But, “nuts” in the way your dad would pretend to be a scary monster to show he loved you more than anything in this world, including the annoying wife he married for her looks which were left out by the curb a decade ago and her money’s running out.  Tonight’s show consisted of four stories, each one about what seemed like a real person, but when improbable detail upon ridiculous circumstance hooked up, one knew they were being put on in the best possible way.  Larry Hankin wants one thing of his audience.  He clearly wants us to have fun.  He’s a complex performer and one can occasionally see the seams fraying within his mind, but to our delight, his recovery is as acrobatically adept as when Carson would screw up a joke.  “Sometimes Jones” is the first character we’re introduced to, and we think and indeed believe this is a real person Larry hung out with when he was homeless in San Francisco for a stretch.   Sometimes Jones steals the president’s wallet and in the wallet is a “get out of death card” and when the grimmest of reapers shows up for his soul, Jones hands him the card, gets to live impermeably and then, just as he’s about to make his getaway, he nicks the card back.

“I make collages out of clarity for art.  I mix up reality for cash”

Hankin doesn’t act out these stories in character; he narrates them, but then when his characters need to speak, Hankin seamlessly steps in, voices, then quickly steps off the character boat and swiftly back onto narrator’s deck.  And he does it without taking a breath.  His energetic art of delivery at top of the show was incredible doggerel poems, literally worthy of the best Hip Hop by way of the great Lord Buckley.  The show is presented without form, without pretense and without a break.   Once strapped in, we’re suddenly on a rickety roller-coaster, commanded by a man who has either just robbed a bank or worse, discovered the cure for cancer and is about to be assassinated by Big Pharma.  The thing about actors is that like all of them have never lived a real life outside the profession.   Even when he was truly homeless, living out of his car, Hankin was an entertainer.  The skills he used to survive were not just how do I eat and where do I sleep, but what can I observe, what can I learn, because it all goes into one big personal creative melting pot.  That of his craft.  There are just so many twists and turns — all completely unexpected — one forgets Hankin is also a writer; and a good one at that.  Both Swiftian and Dickensian, Larry Hankin is a Hollywood treasure in the same way the great Scottish actor Tom Conti is in the UK.   Hankin’s extremely recent appearance on Bill Hader’s new series “Barry” as the assassin has some in this godforsaken town buzzing.  And I mean duh.  This Second City and The Committee company member learned from the masters, worked with the masters and by artistic alchemy, Larry Hankin is a master.

I caught up with Larry after tonight’s performance and did a micro-interview:

SAG: “Larry.  Because I wanted to simply cut and paste your exact wording you emailed me, I’ve put it in this fake interview format.  I hope you don’t mind.  Thought it would save time.”

LH:   “No problem, Steven.  I appreciate the good review, by the way.”

SAG:  “Nothing.  So, please tell me in your own words, which I will copy and paste into the end roll, as it were, of this piece, what your show is about.”

LH:  “It’s a show I wrote about my experiences of being homeless for about a year in San Francisco back-in-the-day: I kind-of folded it all up into funny fables, stories and rants based on what I did, saw and heard that year, and the scams and schemes to just get through the day. The show’s mainly told through two characters I met and still write about: one is a 15 year-old master pickpocket I call Sometimes Jones; and the other is a 70-year-old, self-proclaimed ‘Urban Survivalist’: a homeless, poet-window-washer-panhandler street guru I named Emmett Deemus: he’s still homeless after 40 years, proud of it, and now living on the beach in Venice, California and the show is also about his take on the difference between being, ‘…homeless an’ bein’ Home Free’. It’s me telling stories of not only what homeless and hungry is like and the trips you find yourself going through, but really the bazaar or clever schemes you’d never-ever think you or anyone else would think up just to get through one day. It ain’t easy. But yeah: to me, in hindsight, the worse it got, the funnier it was.”

I am in nothing but awe of Larry Hankin; both his art and his life, or as those in the know like to think of him: Larry Hankin. 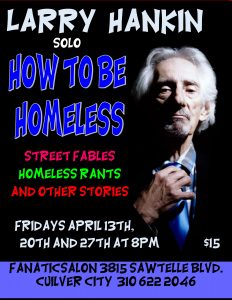 “How To Be Homeless”  was written & is performed by Larry Hankin and enjoys its limited run at The Fanatic Salon with just two more shows remaining.  This Friday April 20 and next Friday April 27.  8pm show, plenty of parking.  Free wine (possibly again).    Tickets only sold at the door and call in reservations a must to guarantee a seat.  Call 310 622 2046