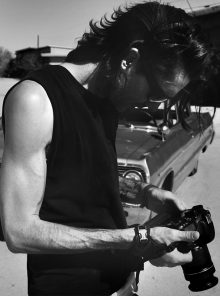 That dreaded date will live in infamy, for MTV was born as it was the beginning of then end of the fetishization of rock n roll album art.  Soon shrunk to a DVD, iconic visual imagery of the music makers would forever (it seems) be relegated to the swift electronic flashes of the music video.  Music would devolve into assembly line production of electronic melody, beat boxes and choreography.  Marshal McLuhan was right.   The medium is the message.  Few music artists would not just survive the video onslaught, but would make hay with it in ways we couldn’t even begin to comprehend.  Bowie, Talking Heads, Devo, and of course Madonna.  Oh, yeah; and Michael. Those guys kept their videos music true to who they were as musical artists.  Dancers and other visual acts who happen to be great musicians. Flash forward a 100 years and wowzie; the Internet has spiked the ever-evolving youth culture into a new land of visual delight and explanation.  Welcome to the world of rock n roll photographer Mark Maryanovich.

Canadian born and America burnished, Maryanovich doesn’t just capture the moment like a wild beast, he invites it in and offers it a cup of tea.

Avidly aware of corporate marketing need, as well as the sacred trust of the artist to keep his or her message pure, Maryanovich meets both artist and suits halfway and does it without compromising either side.  Take for example his work with the late Soundgarden frontman Chris Cornell.  The image of Cornell resting next to his Gibson electric is both symmetrical as well as conflicted; compounded in a way which darkens the green of his guitar, contrasting it with the purity of his bright white T-shirt, as well as the darkening encroaching Abbey Road like bricks on either side, giving the inescapable conclusion this is an important, complex and indeed ultimately doomed musical artist.  One gets the feeling Maryanovich is clever-er than he even lets on, which is always a delight when as one of the record keepers of history and the corporate curators of culture, not only understand, but employ artists on every level of product.

The glowing stage presence of Guns N’ Roses/Velvet Revolver bassist Duff McKagan is akin to photographic evidence of life on Mars; the clear depression of golden hair, sweaty skin and tethered leather second skin gives all we need to know about that moment, but at the same time, ominously too pure an image.  And that seems to be what Mark Maryanovich does best.  Not just capturing the right moment.  What Mark Maryanovich actually does is what all great photo-artists of his time do.   They influence our vision.

From book to album covers, portrait and journalism, like a really good singer, Maryanovich covers it all.

His work with women shows their power, their beauty, their intelligence and not in a fetishistic way.  Maryonovich and his camera act like keepers of the flame, as evidenced by the simply unadulterated clarity of his work. The observer gets the feeling that he not only loves what he does for a living, there’s ample evidence Mark Maryanovich loves his subjects. That concept compared to the all time greats, Adsel Adams loved his pine trees, Diane Arbus loved a good freak, and Annie Leibowitz loves Mick Jagger’s lips. Maryanovich loves the unknown, both the actual unknown, but also the unknown within the known. (Wait a second. Did I just say that?)

From book to album covers, portrait and journalism, like a really good singer, he covers it all. Ultimately, what makes Mark Maryanovich a stand-out in the field of personality photography is that he’s quiet, unassuming, and friendly.   He can afford to be. He’s armed with a camera.

To learn more and see his incredible work, as well as contact info visit markmaryanovich.com

This is Steven Alan “Woophy” Green

Both Swiftian and Dickensian, Larry Hankin's "How To Be Homeless" @ The Fanatic Salon

Dog Man: From the Creator of Captain Underpants (Dog Man #1)

The Perry Funny Show has Arrived At The CIA