The Improv on Melrose is Where Comedians are Friends

L.A. gets knocked a lot.  Everyone dreams of coming to Hollywood, but its residents all act (myself included) like living in Los Angeles voluntarily is like begging to live in the finest part of Hell with your friends.

Friends are what really matters 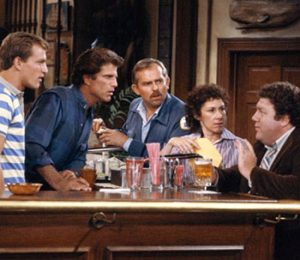 Those of us – me and my friends — who are “in the industry” like to believe that we are working towards something.  Building a career.  Truth is only a very small percentage of us actually get anywhere in “the business”. We want break through the clouds, becoming a famous entertainment entity.  I’ve had my moments, my 15 seconds, as it were.  I’ve signed autographs to fans, and most of those times, it was not me asking them.  So, while I’ve got my dreams spinning in imaginary high-rises in my very empty head, screenplays being read by big important Hollywood decision makers could make all the difference between me feeling like it’s all just a bunch of folderol and actually depositing a very large cashier’s check into my well-worn lifestyle.

Last night, just as dusk forced cars to decide whether or not to make the psychic leap to headlights, I was hanging around Melrose. Hanging in the nearby cigar lounge and decided to go into The Improv and see if there was anyone I knew, other than Eddie, the wonderful resident bartender and actor.  Started off slow, but sure enough just like welcome apparitions, friends and colleagues started to appear.  Comedians who are friends I hadn’t seen in a long time, others who I met last week and forgot their names, actual comedy colleagues I’ve recently worked with, and a young Comedy Central star who sat at the bar, sneering at everyone, whispering social oddities at his two bookended entourage dudes.

The bar at the Improv is legendary.

Les Moonves was a bartender there and now runs CBS.  Back in the day when founder Budd Friedman held court, it was quite uncommonly common to see the likes of Bruce Willis and Arnold Schwarzenegger sitting at “the table”.  After all, they weren’t just superstars, they were friends. The place was jumping in the bar and restaurant and zooming with brilliant comedy in the showroom.  I’m sure he won’t remember, and I don’t think we were ever formally introduced, but I one night in the Eighties in the middle of a busy night, holding my Martini, I turned to comedian Richard Lewis and said, “I understand they’re gonna start doing comedy in the back…”  He laughed.

And, though there’s an entire new generation of young comedians whom I’d never recognize if they were in a police line-up, The Improv bar still held the magic; magic which does not touch the powerful hands of agents, managers, casting directors, or comedy club owners themselves.  It was the magic of friendship.   Those comedians and friends whom I hung with last night, laughed with, made laugh, held court, and generally walked the same mile that all the greats walk, were indeed all unwitting players in the nightclub of my mind.  I had as much of a good time at the Improv bar last night as anybody.  Certainly more apparently, than that sneering Comedy Central comic.  I may not have been on the official stage last night, but at least in my mind, indeed I hosted the best show in town.

This is Steven Alan Green with The Hollywood Dog. 3/31/17

Doing Taxes Can Be Funny

It’s Been a Scorcher