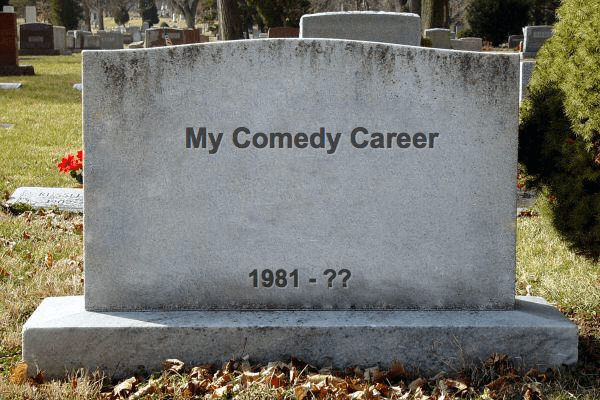 I’ve been asked to write a short true story about “comedy death”; the worst bombing on stage I ever experienced.

Indeed, so many choices; where do I begin.  Since the person asking me for my best worst story is a comedian friend of mine in England for a book he’s completing, I thought I’d kill two comics with one stoner.   And, since it’s a London project, let’s start with probably my worst gig I ever had in England.  Now.  Many of my followers know of my incessant ranting and panting of how great the London comedy scene was and how I rode the wave as long as I could, and was ultimately brought down by British agents, who really only needed to push me a little further on my own petard.

After moving to NYC in 91, initially to interview the great comedian Alan King for a book I was writing at the time, I decided to spend a month in the city of my birth, although I was born in Long Island.  But, Manhattan was the core of the boroughs and through an odd connection through the Sex Pistols film Sid and Nancy, I ended up getting an apartment/converted hotel room at the world infamous Chelsea Hotel, or as the insider residents called it, the Hotel Chelsea.

Sandy Baron was a comedian, actor, and improviser, whose role as Charles ‘Chuck’ Hookstratten in the 1966-67 NBC series “Hey, Landlord”, and better known to my generation as indeed himself as the corned beef roundtable narrator of Woody Allen’s 1984 ode to small time entertainers “Broadway Danny Rose,” but was also returning character Jack Clomps on Seinfeld, as well as famously playing legendary comedian Lenny Bruce on Broadway.  But for me, there is only one role.  That of Stanley Bard, the manager of The Chelsea Hotel in Alex Cox’s 1986 film “Sid and Nancy,” which was about the last days and death of the Sex Pistols’ Sid Vicious (as brilliantly portrayed by “Churchill actor” Gary Oldman) and his knife-wielding live-in girlfriend, Nancy Spungun, Oscar worthy-ly portrayed by Chloe Webb.  It was Sandy Baron who recommended me to Stanley Bard, the manager of the Hotel Chelsea and whom Stanley was portraying in the film. My 30 days at the Chelsea extended to an incredible 14 years maintaining apartment 507 and included living with my then girlfriend Kathrine and getting to know all sorts of other residents such as Dee Dee Ramone, a wonderful artist for Andy Warhol’s Interview Magazine, Richard Bernstein, and Viva one of Warhol’s so-called “Superstars”. During that time, I met in various stages of passing: Woody Allen, Arthur Miller, Keith Richards, Angelina Jolie, Drew Barrymore, and Ethan Hawk. Living at the Chelsea was a purposeful change-up from literally 10 years banging around The Comedy Store and indeed was my entrée into a writing career. I’ll need to devote entire chapter to my Chelsea life whenever I get around to writing that book people keep suggesting I do, but for right now, I want to focus on my worst comedy gig. Or one of them anyways.

The only break I got stand-up-wise in New York of consistent comedy spots, was Silver Friedman, who took-over the Improv at 44th and 9th, it’s original location when Budd moved west; where Jerry Seinfeld, Larry David, Andy Kaufman and Carol Liefer launched their fine careers.   Like Mitzi with The Comedy Store, Silver got The Improv as part of her divorce settlement, and rumor had it her lawyer got Budd to sign a covenant that he couldn’t open an Improv within 100 miles of New York. So when Silver’s incarnation of The Improv shuttered, mostly due I assume to overdevelopment in the Times Square area, I literally had no other clubs to work. Lucien Hold at The Comic Strip kept teasing me how good I was but never gave me work. I did a big bringer at Caroline’s, brought over 60 people thanks to Katherine who was working Comedy Central at the time, but I never got actually booked at what would soon become the big business sucking out of the smaller clubs NYC comedy flagship. And, although I signed with a really good New York book agent, and did a play or two, my father, who was ill, implored me to “go back to London” once more. For him. And, so in 1995, I kissed Katherine goodbye and that I’d “be back in 3 weeks” and there I went.

Again, it’s entire chapter about my London comedy life and how great it was, everything I’ve always dreamed of and more. But, for the purposes of the book for my friend William Wilding, I’d like to tell you the tale of “Stage Death”.

The Cosmic Comedy Club was a really cool comedy club. At 177 Fulham Palace Road in Hammersmith London, it was just a train or short cab ride away. I had already done something there before I ever did comedy there. I was in a film playing “the American big time TV producer”; the Cosmic being the filming location of an important scene. And when I first started doing comedy in London again (I first played the London Comedy Store 3 times in 1982) I did a gig which happened to award 100 Pounds to the best act of the night as voted by the audience, and I won and won against all the local British comics on the bill. That contest was at The Cosmic. So, I got known a little bit by the owner of the club, a woman named Joss. She started giving me regular spots and I don’t remember how many I did, but I do remember the last time I did a gig there.  Believe me; I wished I didn’t.

It was a Friday night and I started my gigs that night at Simon Randall’s Ha Bloody Ha comedy club in Ealing, which was like doing an early gig in Pasadena then doing another gig in Santa Monica. And these things never time out right. One gig starts late, you call the second gig, they say they’re running behind, then after you hang up, the next comic doesn’t show so they put on the headliner. Total chaos unless there wasn’t.   I did my little “stormed it” in Ealing, then got a cab straight to Hammersmith to do my spot at the Cosmic Comedy Club.

When I got to the Cosmic, it was a packed house. 350 men and women in the crowd, drinking and laughing. What I didn’t know about was who they were laughing at. Comedian Noel Britten from Bath, England. And what I didn’t know about Noel was that his act at the time was largely based on “how stupid Americans are”.   Now. Going back to my touring Canada days, playing every Yuk-Yuks from Toronto to Moose Jaw, I already had my built in opener, which was designed to “let the steam outta the room” a little up front and to show “them” that I knew their game.  I would always open my touring act this way:

“Good evening. My name is Steven Alan Green and I am from Hollywood, Los Angeles California, the United States of America!”

Then I’d just stand there like Superman. Every single time, the audience would do a mass “boooo!”. I would then feign trying to figure it out and then say:

To my delight, the audience would applaud even greater this time and then I would say into the mic:

“My name’s Steven Alan Green and I am from London!”

The crowd would cheer; then I would strike a second time…

“So. Do we have any Americans here tonight? I hate those bleedin’ wankers.”

The crowd burst into laughter every single time and loved me from then on out throughout my set. But this time, this night at the Cosmic Comedy Club was quite a different experience indeed.  Remember British comedian Noel Britten and his anti-American act?

So, by the time I got to The Cosmic, Noel was finishing up a rip-roaring storming killing set. I wasn’t paying attention to it because I had to get ready for my set, which was to immediately follow. Noel finishes to a virtual standing-O and leaves the stage. And not his fault whatsoever, he leaves the stage empty. This was because the emcee, a comic named Wara, was nowhere to be found. I mean the stage was empty with all that great comedy inertia generated by Noel just dissipating, having nowhere to go other than that bad place. After an interminable 3 minutes, Wara hastily returns to the mic and says without any sort of professional encouragement to either me or the audience: “Please welcome your next comedian. He’s from America.” Didn’t even say my name. The crowd began to boo even before I hit the stage.

The crowd began to boo even before I hit the stage.

Thinking (stupidly, as it turns out) that, “Ah HAH! This will play right into my opening gambit’s hands, I felt more confident than ever. I leaned into the mic and said with all force and bravado: “My name is Steven Alan Green and I am from Hollywood, Los Angeles California, the United States of America!”. Well. This was akin to literally throwing gasoline on a fire. The entire audience of what must’ve seemed like 350 office blokes, all started to shout back at me, and heckle me and put down America and they just wouldn’t even give me a chance. I tried to let them get it out of their system, but the more I did nothing, the more they spewed drunken venom at me in particular, simply because I was an American. I finally called them all “cunts” and left the stage. I passed the night manager, some uptight stupid office type girl who rather than giving me a shoulder to cry on, she scolded me even more. I left dejected, hurt, confused. I tried to straighten it out with Joss days later, but wasn’t having it and maybe months later I called her and apologized, even though I didn’t think I was entirely at fault here, if even at all. Her response, and I’ll never forget this. Joss said to me on the phone: “I accept your apology, but you can never work my club again.”   Great. Cosmic justice. Couple of years later at the Edinburgh Fringe Festival, I would run into Noel Britten, who was doing a show at the same venue I was. I remember we sat and talked and what a nice bloke.

The worst part of this story? Now that I’ve written it and remembered it, it’s not by far my worst ever gig. Having said that, it’ll do for now.

This is Steven Alan Green and I’m an American! 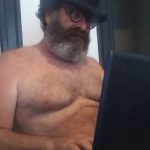 With a Little Help…It’s John Belushi! @ The Whitefire Theatre – Review

Confusing Signs of the Times